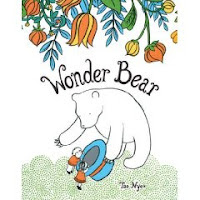 From the moment I saw this cover, I was mesmerized.

Two children trudge up a hill and plant some seeds. The girl plants watermelon, and the boy seemingly plants top hats.

As they sleep beside the garden, something magical happens. The top hat seeds thrust up a twisted vine that is topped with gorgeous orange flowers. Out from an orange flower climbs a polar bear wearing a top hat.

From that top hat wondrous things emerge for the children with which to play. Monkeys with fuzzy arms and legs. Lion shaped bubbles. Breezes filled with sea creatures.

After the adventure, the children are put back to bed, the wonders go back into the hat, and though the vine stays, the bear and his hat do not.

Was it a dream?

Wordless, wonderful an absolutely beautiful, Wonder Bear was apparently inspired by a gummi bear. Tao Nyeu is certainly a gifted artist with a real sense of story. Under the dust jacket are pre-printed covers featuring our monkey friends and wonder bear himself (herself?). I am not a student of design, but I do know when folks get it right. Wonder Bear begs readers to go back time and time again to discover new wonders.

Grace is back, and she is on a mission. She is newly crazy about dogs, and she is trying to convince her parents that she is responsible enough to have one. The problem is that her parents say that they are not animal people. But Grace is unconvinced. Both of her parents had pets growing up, so deep down inside, they must be animal people.

How can Grace convince her folks that she can handle a dog?

She comes up with a great solution with the help of friends Mimi, Max and Sammy. Grace and Mimi build a cardboard dog, and start taking care of it like they would take care of a live dog. But trouble can even find a dog made out of cardboard.

Charise Mericle Harper continues the Grace series effortlessly. The familiar characters are there, but they each grow from book to book. The backdrop of school and family, and the quest for a pet will be familiar to many a reader. The vignette style and drawings will keep even reluctant readers moving along, and Grace is just as lovable as ever!
Posted by Stacy Dillon at 10:46 AM 2 comments: 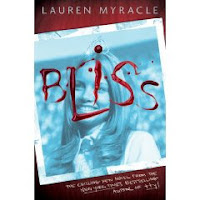 It's 1969 Atlanta, and Bliss Inthemorningdew (yes that is her name) has just been dropped off by her hippie parents at her grandmother's place. Her folks have just left the commune and are heading to Canada, and Bliss' world is about to change.

Her grandmother is a true Southern lady, and quickly enrolls Bliss in the tony Crestview private school. Bliss is excited about actually going to a real school, but she is keeping her friend from the commune Flying V's warning about mean girls in the back of her mind. (Flying V has a gift of sight, and Bliss has a bit of it herself).

Bliss is thrown for a loop when her peer mentor Sarah Lynn ditches her. Luckily Thelma has decided to take Bliss under her wing and she and friends Jolene and Deedee school Bliss in the ways of not only Crestview, but life in Atlanta off the commune.

Unfortunately, when Flying V's warning seems to come into play, and Bliss witnesses some cruelty between classmates, Bliss ends up befriending Sandy. Sandy who the other kids make fun of because she's clumsy, she smells, and well, she's Sandy.

But Bliss feels good about being friends with Sandy. At first. They talk about conformity, power and the Manson Family murder trial. But Sandy is really needy, and it's draining spending time with her. Bliss would rather be with Thelma, Deedee and Jolene, not to mention super cute Mitchell.

What will happen when Sandy gets mixed up in a quest for power that involves the supernatural? Can Bliss disentangle herself from this girl who is set on revenge?

Lauren Myracle has written a thrilling page turner reminiscent of Nixon and Duncan. It's perfectly paced and will keep readers wanting more. Chapters are interspersed with journal pages which are border line terrifying when one thinks about the implications of animal torture and the dark arts.

Bliss is not only a scary thriller. The setting of late 1960s Atlanta allows for some frank discussions of race and the nature of racism. From the token black student at Crestview, to the Klan daddies, to teachers feeling free to use the "N" word in their classrooms, Bliss will have readers chewing on some big ideas as well.
Posted by Stacy Dillon at 7:21 AM 2 comments: