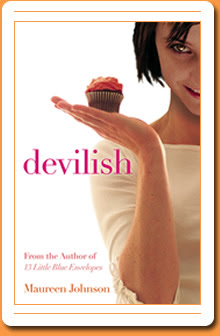 Ahhhh. Nothing like a little Satan around the holidays!

It is Big-Little day and Jane is a little concerned that her bestfriend Ally won't have any freshman want to be her little. Ally is a little strange. Well, she tries too hard, anyway. The reviews from the junior judges were out, and while Jane came off ok, nothing was spared in mocking Ally's looks.

Just before the Big-Little ceremony is to begin, Ally runs up to Jane, cupcake in hand. It was in her locker with a note reading "Will you be my big?". Jane thinks she can relax a little. Then the whole thing starts. Several of the girls have plenty of freshmen who want to be paired with them, but Jane and Ally stand alone. All of a sudden Jane recognizes the pale and pasty look on Ally's face. But it's too late. Vomit. Projectile. Everywhere.

Is there anything more humiliating in highschool than actually puking on people in front of other people?

Jane is trying to help Ally in the restroom when a tall girl enters. Jane hasn't seen her before, but she can tell that she's a sophomore from her blazer. She tells Jane to go to class and that she wants to be Ally's little.

Ally lays low for awhile, but returns with trendy clothes and a fashionable do.

Maureen Johnson has written a smart and sassy story that Buffy fans will adore. Yes, the devil exists...but not as you would assume. And yes there are forces working to save the souls that the devil wants. And they are not who you think they will be. Fun, fast, light and dark at the same time, Devilish will appeal to girls (and boys) who recognize highschool popularity for what it is!