Love Curse of the Rumbaughs

Now. This is my kind of book. Creepy. Odd. Super-well-written. And, in my opinion, overlooked.

Ivy was always drawn to the twins. Ab and Dolph were identical. Pharmacists. Taxidermists. Elderly.

It has always been Ivy and her mom. She went to the twins place afterschool, in the hours before her mother came home from work. She had a play area in the basement, but little did Ivy know that her cottage of oversized pharmacy props were not the only things existing in the basement.

Then on the fateful Easter that Ivy was 7, she made a discovery that would alter her perception forever. What she discovers in the twin's basement is horrific, yet appealing to Ivy.

What follows is a true gothic story. Without giving too much away, all I can say is that pages 177 and 180 are truly stupifying. In a rueful smile way. Am I making any sense?

I do know that there was a bit of a discussion about this title on adbooks. I steered clear since I knew I wanted to read this title. This is one of those books like Funny Little Monkey and 33 Snowfish that elicits extreme reaction. I think that Gantos has outdone himself. This is simply brilliant!
Posted by Stacy Dillon at 8:08 PM No comments:

this is what i did 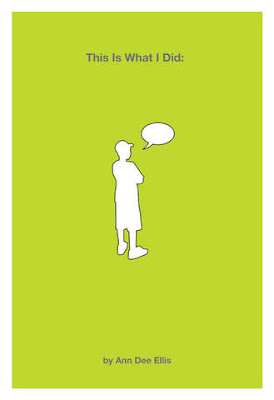 Logan's family has just moved. He is on to a new school. His parents think this will be for the best after what happend.

But history has a way of following you.

Zyler and Logan used to be best friends. They weren't the kind of guys who had lots of friends or girlfriends, but they were good that way. Zyler spent time at Logan's house, and every now and again - if Zyler's dad wasn't home - Logan would go over there too.

Then Logan saw what he saw.

Then his family moved.

Ann Dee Ellis has written and poignant and moving story about growing up, families, rumours and friendship. How far would you go for a friend? What would you do if you saw something terrible happening? Would you jump in?

Ellis has a way of writing silence that is simply brilliant. The setting is so clear, and our kids who have read the arc are simply beside themselves with how much they like this is what i did.
Posted by Stacy Dillon at 9:07 AM No comments: 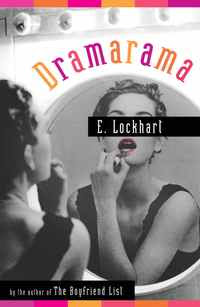 Sayde and Demi are getting the heck out of Dodge (aka Brenton, OH)and going off to the fabu summer drama institute at Wildewood Academy. Before she met Demi, Sayde was plain old Sarah, and her life lacked razzle-dazzle. Now, on the way to Wildewood with Demi dropping his straight boy drag, Sadye is sure she is in for the time of her life.

She is partly right.

Wildewood has everything. Amazing productions, Broadway directors, students who have performed all over the country. There are even a few straight boys for Sadye to consider pouncing. She gets along fine on the surface with her roomies Nanette, Iz and Candie, but underneath it all, tall gawky Sadye still doesn't fit.

She wonders how all of these other kids can simply accept direction. Especially when it's obvious that better options exist. Even Demi starts to think that Sayde is being a downer.

Filled with all of the heartache and angst one expects at summer camp, E. Lockhart has written a superfun book about growing up and growing apart, that theater geeks as well as those who have never even heard of Guys and Dolls will eat up.

I am as far from a theater person as you can get. My high school didn't even have a drama option, and musicals give me a rash, but I truly enjoyed this book!
Posted by Stacy Dillon at 1:14 PM No comments: 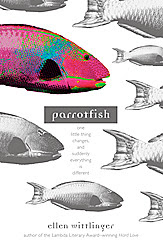 Angela has finally decided on her new name. Grady. Gender ambiguous and perfect. But when she lets her family know her decision, she is met with a distinct chill.

Angela had been homeschooled until she hit her sophmore year in highschool. She and Eve had been best buddies, and the fact that Angela never felt like she fit into a girl mode was not that big of a problem. Not until the uber-girliness comparisons of highschool. She had first come out as a lesbian, but that didn't feel right either. She doesn't feel like a girl who likes girls, she feels like a boy who like girls.

Grady is lucky in a way. He first reveals himself to classmate Sebastian. Sebastian is a geek, but has managed to be friendly with everyone. Sebastian's reaction to Grady's announcement is to exclaim, "Wow!...You're just like the stoplight parrotfish!" Not exactly the reaction Grady was expecting, but not the worst reaction either.

But all reactions to Grady are not so positive. Mean girl Danya has decided that Grady is a pervert and hatches a plan to embarass him infront of everyone. Some teachers refuse to call Grady anything but Angela. And then there are the logistics of where to go to the bathroom, and what to do with a crush.

Ellen Wittlinger has written a story about the search to fit in a world that is either male or female. Readers are forced to face their own stereotypes and opinions about gender identity. This is a book that will fill a large void in the YA lit world, and would make for an amazing classroom read (at least at the school I work in). I had a couple of problems with the way that Grady waxes poetic about Kita's ethnicity, but other than that, this is a solid novel with likable (and not so likeable) characters. You will be rooting for Grady and loving Sebastian before you know it!
Posted by Stacy Dillon at 1:49 PM No comments:

Why do I get so excited about BookExpo?

Lots of my librarian friends and colleagues go to these things with a "Been there, done that" sort of attitude. No matter how many times I score a free book, I feel the rush!

I love meeting authors. I love meeting fellow librarians and bloggers. So if anyone else is going to be there, drop me a line. I am going on the Friday, and plan on spending the day!

Last time I was all pregnant and tired. This afforded me no sympathy. (See my previous blog entry from 2 years ago here!) No more belly, and my elbows are ready for shoving! I also come with the supreme knowledge that while rolly bags are not allowed on the floor, you can bring one and check it...thus making the trip home, tres facile!