In Search of Mockingbird...

...is over at Tweendom!
Posted by Stacy Dillon at 8:47 PM No comments:

...by Woodson is over at Tweendom!
Posted by Stacy Dillon at 12:18 PM No comments:

So, in the name of full disclosure, Jennifer Hubert is my colleague. And my friend. My good friend.

I have watched her, over the past couple of years, write this book. And now it is in my hands! So exciting!

This is THE book that you need if you are an educator, librarian or parent, and you don't read voraciously, constantly, or just plain all the time. Jen explores YA books under the same categories found on her website: True Grit, Boy Meets Book, Graphic Fantastic, et cetera. She maintains her chatty style, while providing professionals and parents alike with amazing amounts of information on titles.

She has just started blogging it herself in the form of a blog that gives you the flavour of her book, and welcomes your feedback as well. Check it out here!

Jen is an amazing advocate for youth and young adult literature. She has been a mentor to me over the years, and I am so proud of her!
Posted by Stacy Dillon at 2:36 PM No comments:

Every now and again, some nonfiction comes along that TOTALLY captures me. First it was Devil in the White City, then it was Maximum City, and now it's Sweet and Low, by Rich Cohen.

I love when I learn stuff. Like Canarsie used to be a swamp where the mob dumped bodies. Like the sugar packet wasn't invented until the late 1940s. Like Saccharine isn't a carcinogen (What!)

This is a family tragedy of epic proportions. It's a study of that 3 generation theory. He who is hungry builds the business. Next in line holds the fort. Next in line watches it all float away. While that isn't exactly what happens here, the reader cannot help but feel badly for patriarch Ben, who though quite unlikeable, really built something from nothing. Imagine watching your son screw the whole thing up.

Post war NYC has always fascinated me, and though it sounds cliche, I will say it ... the city is a character in itself. After living here for a decade, I feel an uncomfortable kinship with NYC, and I delight in reading about it.

Cohen's style is incredibly readable. Though I slow down for nonfiction, I was compelled to have at it until it was finished (3 days of commuting). I loved it. My colleagues are probably sick of hearing about it, but Sweet and Low is one of those books that makes me say, "No really...listen to this! You won't believe this!"

Posted by Stacy Dillon at 6:44 PM No comments: 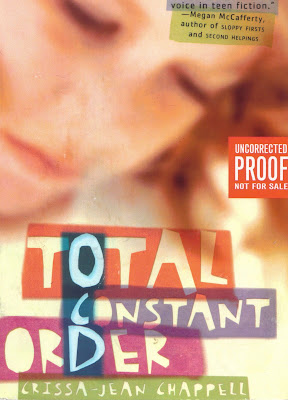 I was delighted when I received this title in the mail.
Fin's life has changed so much in the last year. Her dad dragged her family from Vermont down to Florida, and to top it off, her folks split. Fin doesn't know how to fit into her Miami highschool, and consequently is ostracized.
To cope, she counts. Count, and counts, and counts. Some numbers are lucky. Whether they are even or odd makes a difference as well.
Her relationship with her mother is strained. Her mom brings her to
see a shrink who thinks that Paxil will be the answer to all the problems. It's not. The drug makes everything worse.
Fin connects with her school's weird kid, Thayer, after seeing him at her shrink's office. Thayer tells her about Ritalin, tagging, manatees...he's the only one that gives Fin the time of day. The problem is, Thayer's not exactly on solid ground himself.
Crissa Jean Chappell has written a sensative account of the lonliness and distress that disorders such as OCD bring to those who suffer. In our society today, too many folks joke about these things. Comments like "What are you? ADD?" fly around lunchrooms and libraries without a second thought. Perhaps Total Constant Order can open some eyes.
Posted by Stacy Dillon at 8:47 AM No comments:

Spencer, Aria, Emily and Hanna were all friends with Ali. They loved her and loathed her at the same time. She always managed to get secrets out of them, and then lord that fact over their heads.

Two years later, the girls are juniors and have changed drastically since junior high. Aria is back from Iceland and is more bohemian than ever. Hanna lost all that weight and wears the latest fashions. Emily is trying to love her boyfriend, while she is lusting after new girl Maya. And Spencer is still trying to surpass her older sister.

An amazing amount of things are going on in this book. Sex, drinking, affairs with teachers etc. It kind of reminded me of a girl version of Doing It in that my brain refuses to believe that all of this could possibly be going on.

But admidst all of this a some pieces of brilliance. Like when Emily realizes that her mom is a racist. The slow dawning of this unthinkable idea is life altering for her. Also, the pacing is perfect. What Sara Shepard is writing about is nothing new, but she made me stay up past my bedtime, wanting to find out what the "Jenna Thing" was all about.

More substantive that other mean girl series, girls 8th grade and up are going crazy for Pretty Little Liars.

Posted by Stacy Dillon at 6:53 AM No comments:

The Misadventures of Benjamin Bartholomew Piff : You Wish

...is over at Tweendom!
Posted by Stacy Dillon at 2:40 PM No comments:

There's Nothing To Do On Mars

Davey Martin is bored. Why? Because there's nothing to do on Mars. "The nights were very cold. The dust storms were terrible. And there was no water anywhere."

When Davey's parents finally holler at him to "Go out and play", he takes his trusty robot dog Polaris and off they go. But Davey is still bored.

He decides to climb a tree.

He decides to build a fort.

He rain dances with the stinky Martians, digs for buried treasure, and digs in a volcano before inadvertantly finding the water that Mars so needs. Mars isn't so boring anymore, but it sure is getting crowded.

Is there anything to do on Saturn?

Chris Gall's combination of "be careful what you wish for", and "Terrible No Good Day" feel is a sure fire bet with planet savy kids. Pulp style illustrations give There's Nothing To Do On Mars the type of flare that will likely bring professional recognition. All I can tell you is it's the most grabbed for arc on my desk!

Posted by Stacy Dillon at 9:22 PM No comments: 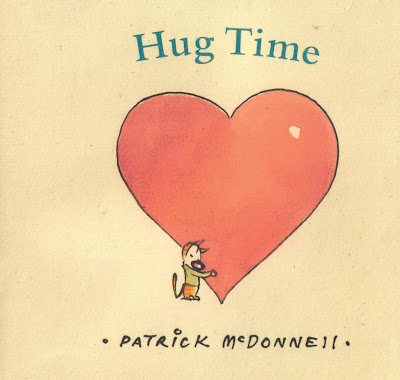 Preview season is upon us, it seems, and my fabu colleague picked up some picture book arcs from Little Brown and Co.
Hug Time, by Patrick McDonnell immediately captured my heart.
Jules wants to make the world better, and decides that the best way to do so is by hugging the whole world. After making his "Hug To-Do List", he sets off.
Jules starts with his best friend, and then branches out to butterflies, buttercups and squirrels. This is simply not enough hugging, so Jules takes off for far flung places. He hugs in Africa, and India, Australia...he even goes to the North Pole.
In sing song verse with whimsical watercolour illustrations, McDonnell makes the point that, "The world is so big...And yet so small, It's time that we embrace it all." There's a lesson we all can learn from. Heartwarming and sweet, Hug Time is a guaranteed winner with preschoolers and world weary 4th graders as well.
Posted by Stacy Dillon at 9:07 PM No comments:

Where the heck have I been?

Head on over to Westerblog to see what I am on about.

*dance of joy*
Posted by Stacy Dillon at 4:01 PM No comments:

...is over at Tweendom.
Posted by Stacy Dillon at 3:02 PM No comments: