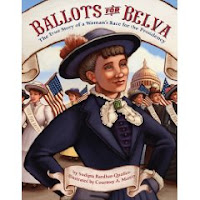 How timely is this?

Hillary wasn't first. Nor was Ferraro. Have you heard of Belva Lockwood? I had not either before reading this fabulous picture book biography.

Belva once read that a person could move mountains if he or she only had faith. Belva believed this wholeheartedly, and lived her life accordingly. Belva was born in Niagara County, New York in the year 1830. She was the daughter of a farmer, and by the time she was a 39 she had already been married, had a child, been widowed, become a teacher and gotten involved in the suffrage movement. She decided that she wanted to attend law school. In 1869, however, not many law schools wanted to admit women, and the few that did certainly did not want to grant degrees to the women who attended. If you've figured anything out about Belva by now, you know that she found a way to get her deserved degree, and to have it signed by President Ulysses S. Grant to boot!

What could be next for Belva?

Before the ratification of the vote, Belva ran for president! And she got votes. Votes from men. 4711 to be exact. She got more votes than that, but they were thrown out, since the men doing the counting could not believe that anyone would actually vote for a woman.

I found this story not only timely, but incredibly inspiring as well. An author's note, glossary and timeline are included, which make this ripe for classroom use. Do today's kids know that the vote was taken away from women in 1787 (1807 in the case of NJ)? Author Sudipta Bardhan-Quallen has done a great job of writing a readable storyline filled with, but not laden down by, facts surrounding suffrage and the political process. Courtney A. Martin's illustrations reflect the time period, though I do wish that the cat accompanying Belva everywhere was explained! This is a book that deserves a prominent place in classroom and library alike!
Posted by Stacy Dillon at 10:31 AM

I was very excited to read your post about this book, and am very glad to see it being received in such a positive way. I too agree that as far as timely biographies go, this one does have something to offer a teachers and students alike. Belva was a very inspiring woman who did remarkable things during a time when being a woman meant significant societal limitations.

As a side note, I'd like to mention that Belva's little cat was intended to be a silent, secondary narrative device-- meant primarily to give a very strong woman like Belva a sensitive, human quality with which children of all ages can more easily relate.

It is always a challenge for an illustrator to bring visual life to what can easily become a stale, dated, and dry biography. It was my belief that the addition of a friend for Belva would add a symbolic relationship element, and make her seem not so very alone on her amazing journey through life.

Thanks again for the post!
Sincerely,
Courtney Autumn Martin
www.c-a-martin.com

Thanks for dropping by, Courtney! I do agree that the cat made me think that Belva was a bit softer than she appears sometimes! I am glad that I can now answer the inevitable questions from my 3rd graders. Sometimes during the year I ask my students to illustrate stories...I will make sure to use Belva and her cat as an example of describing a character in a subtle way!